Shutting down Google Voice for Outlook

Google Voice for Outlook Mobile Service was a pet project I started during my year between High School and University. I created it because I had an odd obsession with Outlook at the time and I thought it amazingly silly to pay someone to send text messages through Outlook when I already had a Google Voice account.

At first, the service was run through mirrors (other people hosted my code and I help them set it up with the agreement that their endpoint be available to the public). I wasn’t too fond of this, as I didn’t have real control over the security aspect (if they were so inclined, they could have stolen your username and password). Two years ago I purchased an IP address and SSL certificate on my shared host for the explicit purpose of securely hosting Google Voice for Outlook.

I mentioned the cost a few times, and solicited donations. I didn’t keep very good track, but I probably accumulated no more than $50. The IP address (which was required for SSL on this host) was $60 a year by itself.

Don’t get me wrong, I was very happy for this project - and I’ve loved running it, despite the code being outdated (I’m a much better programmer now, and PHP and it’s community have come a long way), lack of a business model, and a near-complete lack of any statistics gathering. (I have absolutely no idea how many people have ever used my service. All I know is the amount of hits on the SOAP endpoints.) I was very serious about security, and about not handling any more information than necessary.

Either way, my IP address expires on the 6th of April, and I have no plans to renew it. In fact, due to the way Dreamhost is setup, I have to actively cancel it before then. On that note, Google Voice for Outlook Mobile Service will effectively cease operations on April 5th, 2014.

Amusingly, this is the first time I’ve ever actually looked at the statistics. I had forgotten my webhost was collecting some simplistic stats while I was writing this post. GVOMS may not have been the most successful service - but I’m certainly glad it wasn’t the least successful either. 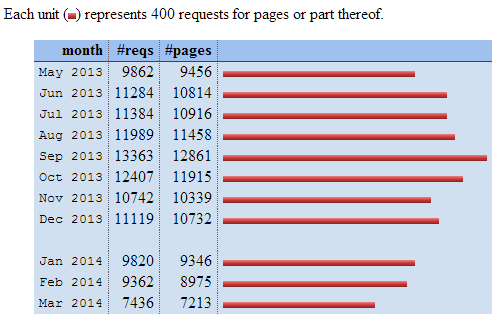 The reason GVOMS is shutting down is not because money, or because I don’t have the time - because both of those have been true for over a year already, and the first one doesn’t even apply since I’m moving most of my small websites over onto a cheaper VPS rather than renewing my shared hosting, but only because it’s not worth the time or effort to continue it’s operations with the looming knowledge of Google “killing” third party Google Voice services this coming May - as well as the knowledge that Microsoft has ceased support for the OMS protocol in the newer versions of Microsoft Outlook.

To everyone who was ever once a user of Google Voice for Outlook Mobile Service - thank you for coming along for the ride. It was truly enjoyable.

For those interested in the service, or possibly reading about it for the first time, you can find out more at our website, gvoms.com or read my terrible, old code on github.

This is a copy of an email I sent earlier today to those that subscribed for updates on Mine-Ads It’s been about a year and a half since I announced that I wanted to do this thing. Rest easy knowing that I sadly did not get very far.... Continue →